The automotive navigation system is a satellite navigation system design. It uses the Global Positioning System (GPS) to attain the user’s position data and locates them on the road in the system’s map database. GPS is a radio positioning system combining computer mapping techniques depending on the information time as well as the velocity for providing three-dimensional positions to appropriately equip the users anywhere on or near the surface of the earth.

The navigation system is one amongst the major discovery and innovations in the wireless telecommunication industry. It acts as a significant tool for land surveying, cartography (map-making) and positions locating and has become an imperative utility used across the globe, essentially for modern navigation on sea, land, and air. The navigation systems either come installed in the vehicle, or they can be later installed as per the demand.

Global automotive navigation system market is estimated to grow with 9.95% CAGR during the forecasting years of 2019-2027. The base year considered for the study is 2018 and the estimated period is between 2019 and 2027. The following factors drive the growth of this market: 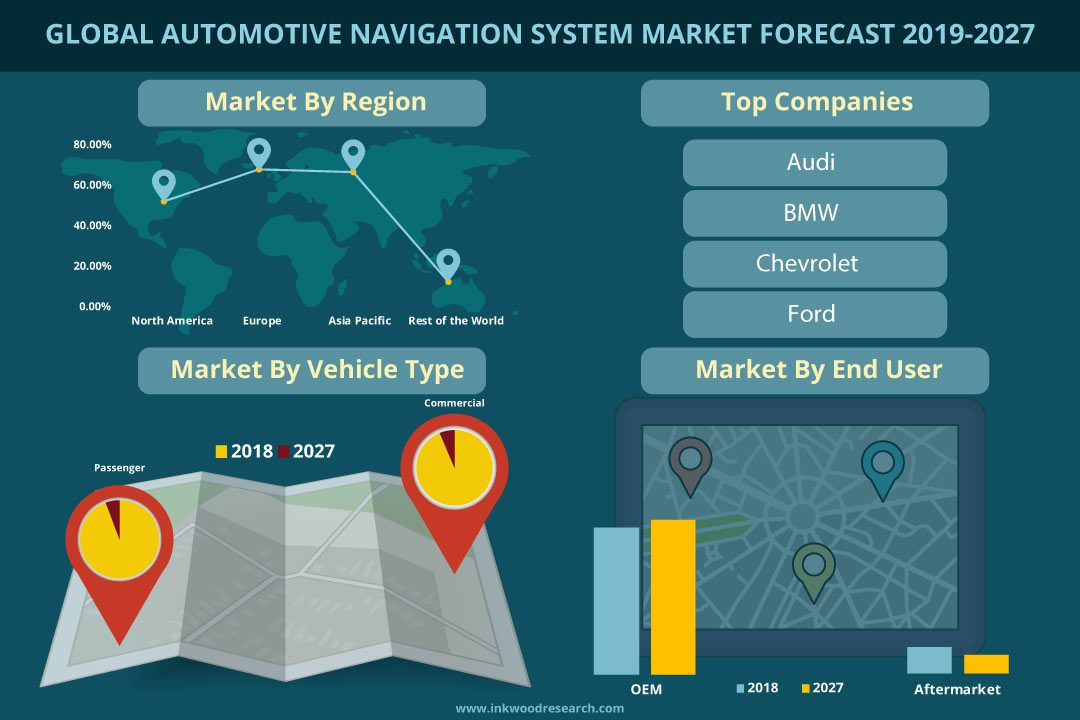 The most important driver is the increase in the number of vehicle sales worldwide. The global market for vehicles is booming like never before. The strong and profitable growth of the automotive sector after the economic crisis is likely to continue during 2016. The annual sales in some regions would reach pre-recession levels. The market for automotive sales in the US looks quite optimistic with over 17 million vehicles sold in 2015. Europe, after its six-year sales slump, continued to grow at a weaker pace with a steady economic recovery during the last two years, where the domestic consumption rate went up by 15%. The overall market for the automotive industry, in spite of slow growths in Russia and China, witnessed a subsequent hike post the recession; the production and sales statistics are approaching close to the pre-recession levels in a majority of the countries. This spike in the automotive industry and demand for more functions in the vehicle has resulted in growing automobile production with additional features like the navigation system.

As a whole, the recovering automotive industry is acting as a major driver for the global automotive navigation system market.

Present day OEM navigation systems offer a larger screen display with high definition resolution and faster processor than portable type. BMW has a 10-inch screen navigation system, employing a 1.3 GHz processor, with a built-in 3D graphics chip that permits fluid browsing and scrolling. Alpine, Denso, Mitsubishi, and Bosch are some of the major OEM navigation devices manufacturers. All the major automakers around the world have collaboration with one or more of these OEM or have their in-house navigation system manufacturing facility.

As of 2015, Harman is the leading provider of OEM navigation systems with a large number of its units being employed in Mercedes SLK, BMW X series, etc. Harman also offers the system with a four-year warranty and an additional two years CPO warranty. Fully integrated car navigation systems were found to improve resale and trade-in value of the vehicle, making them more popular among the affluent customers, who often replace their old vehicles with new ones, once every 3-4 years. OEM devices also have the perks of getting free map updates and driving information, since the built-in unit comes with all the necessary lifetime agreements.

With the United States making a more accurate GPS signal available for civilian use in the year 2000, the market for navigation systems increased at a very large rate. Nowadays, many of the high-end cars come equipped with an entertainment+information system called the infotainment system. The high cost of infotainment systems which include navigation system and other features like audio control, etc. which are installed by the OEMs like Fiat-Chrysler’s Uconnect 8.4, Hyundai’s Blue Link, BMW’s iDrive, Audi’s MMI, Volvo’s Sensus Connect and many have led an upsurge in the aftermarkets for these systems.

As compared to a price of around $1,500-$3,000 charged by these OEMs for the infotainment systems, there are a large number of great products in the market from other world leaders like Pioneer, Kenwood, Alpine, Delphi, Fujitsu, etc. which give the customer a choice of which infotainment system to choose.

The report on global automotive navigation system market includes segmentation on the basis of end-user, vehicle type, and component.

End-User is sub-segmented into:

Vehicle Type is sub-segmented into:

Component is sub-segmented into:

Geographically, the global automotive navigation system market has been segmented on the basis of four major regions, which includes:

The Asia Pacific is the largest and the fastest growing region for automotive navigation system market. The Asia Pacific is a powerhouse for the automotive industry around the world with a very attractive perspective for the coming years. The region presents the double interest of having large markets with important sales growth potential and important automotive manufacturing hubs to produce for Asia and the world.

The automotive sales in the Asia Pacific region crossed 43.8 million in 2015 and are expected to increase at a very high rate owing to the increasing disposable income. Three major factors drive Asia Pacific market for the in-car navigation system,i.e., the rise in passenger and luxury car market, growing transportation & communication infrastructure and increasing awareness about complex features of the in-car navigation system.

Asia as an emerging economy is expected to offer promising growth for the navigation systems market, as to North America and Europe. The Asia Pacific is expected to register a high growth rate in global in-car navigation system market over the forecast period, due to the presence of major car manufacturers such as Hyundai, Ford, Volkswagen and Toyota ramping up their production bases in the region.

The major market players of the global automotive navigation system market are:

Company profiles cover the analysis of important players. These companies are using organic and inorganic strategies for growth. For instance, in February 2019, Bosch unveiled the vehicle motion and position sensor. Localization is a key enabler of automated driving. In January 2019, Hyundai Motor Group, in collaboration with Swiss deep-tech startup company WayRay AG, unveiled the world’s first holographic Augmented Reality (AR) Navigation System equipped in the Genesis G80 at CES 2019. In January 2019, TomTom (TOM2) announced that it would accelerate the future of driving by collaborating with DENSO on its software platform for autonomous vehicles. In November 2017, Alpine Electronics, Inc. (Alpine) and Konica Minolta, Inc. (Konica Minolta) announced a joint development on the head-up display (HUD) applying the 3D augmented reality (AR) technology for automotive use.

TABLE 5:       AUTONOMOUS CARS FORECAST (WITH AT LEAST ONE SELF-DRIVING FEATURE)