The global methanol market is anticipated to grow from $XX million in 2018 to $60,447 million by 2027, at a CAGR of 5.66% between 2019 and 2027. Methanol, which is also known as methyl alcohol, wood alcohol, or even as wood spirit. It’s the purest form of a series of organic compounds known as alcohol. It consists of a methyl group (CH3) linked with a hydroxyl group (OH). Initially, methanol was produced by a chemical process called ‘destructive distillation’ of wood. Nowadays, natural gas is being replaced by coal for the production of methanol increasingly. Another method of producing methanol is by using solid biomass such as agricultural and industrial waste, instead of syngas.

Methanol, which is also known as methyl alcohol, wood alcohol, or even as wood spirit. It’s the purest form of a series of organic compounds known as alcohol. It consists of a methyl group (CH3) linked with a hydroxyl group (OH). Initially, methanol was produced by a chemical process called ‘destructive distillation’ of wood. Nowadays, natural gas is being replaced by coal for the production of methanol increasingly. Another method of producing methanol is by using solid biomass such as agricultural and industrial waste, instead of syngas.

The methanol market is primarily driven by the following factors: 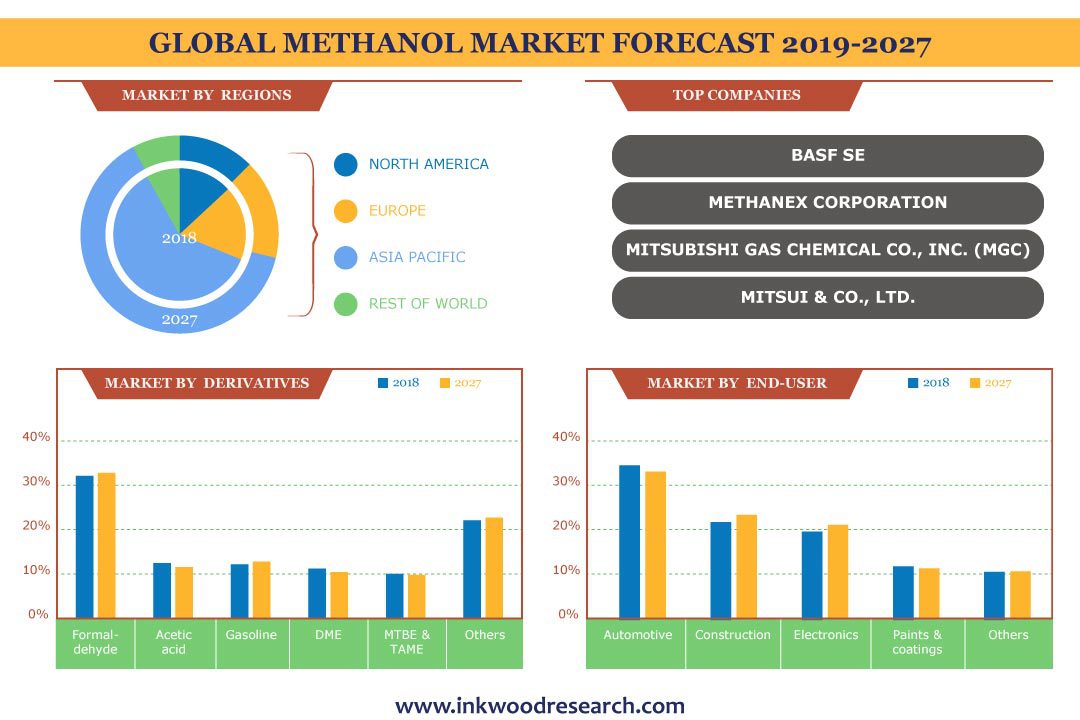 The critical driver that is increasing the growth of the methanol market globally is the piloting need for petrochemicals, especially in the Asia-pacific region. The rising demand for methanol products from several industries such as packaging, textile, plastics, construction, healthcare, and transportation is one of the primary reasons for the growth of the petrochemical industry globally. The market for petrochemical products such as vinyl, styrene, ethylene, benzene, xylene, propylene, etc., is rising considerably.

The end-users of the methanol market are plenty in number. Methanol is widely used in the automotive sector. It can be combined with gasoline and used in the internal combustion engines of automobiles. The conservative fuels in the automotive business are now effectively replaced with more effective substitutes like propylene and ethylene glycol. The growth of formaldehyde derivative segment is anticipated to fuel the demand for methanol in the construction industry over the forecast years. The applications of methanol in electronics are continuously increasing, owing to its ecological nature.

The lack of feedstock, resources, and the use of fuel-grade bioethanol or ethanol in comparison to methanol are the major factors hindering the methanol market.

The global methanol market segments include consumers and derivatives.

End-users are further segmented into:

Derivatives are further segmented into:

This report covers the present market conditions and the growth prospects of the global methanol market for 2019-2027 and considered the revenue generated through the sales of methanol for derivatives to calculate the market size by considering 2018 as the base year.

Geographically, the global methanol market has been segmented based on four major regions, which include:

The methanol market in APAC is expected to hold the largest share by 2027 owing to the APAC’s dominance in the global market, mainly due to the rising demand for methanol and its by-products from the construction, automotive, textile, and furniture industries. China emerged as one of the leading countries in APAC, and the country’s energy and petrochemical sectors are piloting the demand for methanol. Also, the Asia-Pacific market is anticipated to be the fastest-growing region for the global market. The need for methanol is rising in this region at a much faster pace as compared to other regions like Europe and North America.

The methanol market is segmented on derivatives which are further sub-divided into formaldehyde, gasoline, DME, Acetic acid, MTBE and TAME, and others. Formaldehyde is a versatile chemical used in the manufacturing of a wide variety of commercial chemicals. The secondary derivatives of the acetic acid include vinyl acetate, acetic anhydride, and terephthalic acid. Acetic acid is primarily used in the production of polyester fiber intermediates and polyvinyl alcohol intermediates. Methanol is used to manufacture low-cost and sustainable gasoline that can be transported. DME is an aerosol propellant, the demand for which is increasing for the production of transportation fuel. MTBE and TAME are primarily used to boost gasoline octane values. These compounds allow efficient combustion as they add oxygen to gasoline upon blending. Other derivatives of methanol include solvents, methylamines, methyl methacrylate, and chloromethane.

The major market players in the global methanol market are:

Company profiles cover the analysis of outstanding players and strategic initiatives taken by them. For example, in November 2018, BASF produced methanol based on renewable raw materials according to the biomass balance approach.