Global In-vitro fertilization market is estimated to grow with approx.10.59% CAGR during the year 2018 – 2026. The base year considered for the study is 2017 and the forecast period is between 2018-2026. Global In-vitro fertilization market is primarily driven by the following factors: Increasing rate of infertility across the globe. Flexible government regulations for fertility tourism 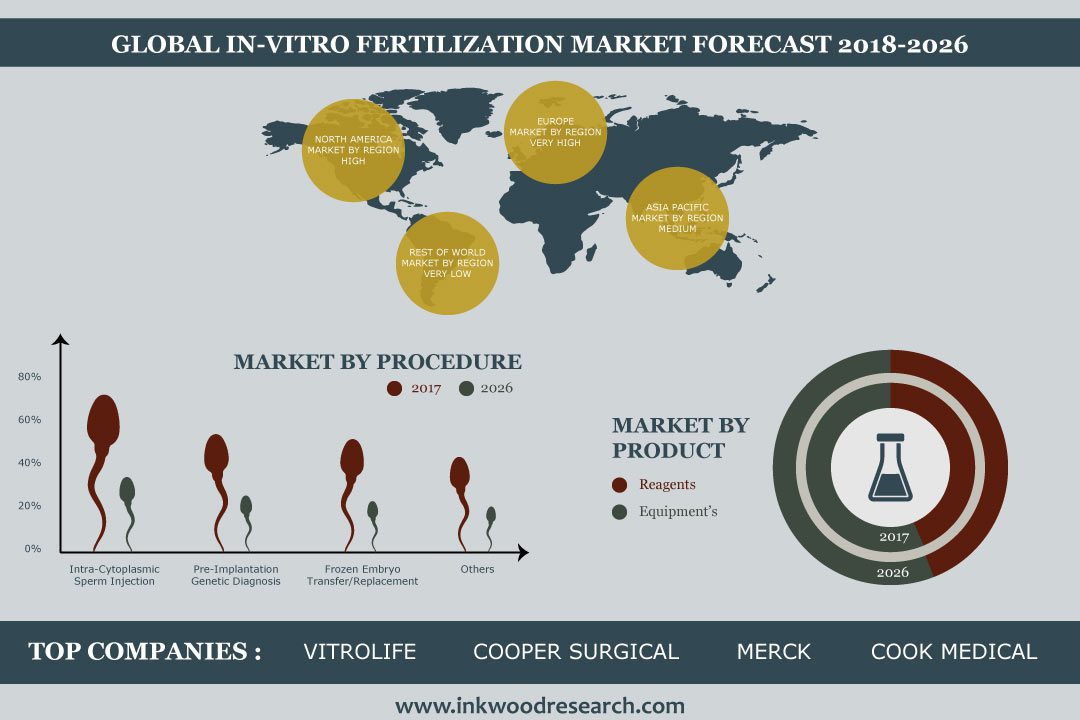 The key factor responsible for the rising adoption of in-vitro fertilization techniques is the increasing rate of infertility across the globe. According to the World Health Organization (WHO), one in every six couple suffers from infertility related issues. Infertility is caused by various reasons such as physiological dysfunction, anatomical or genetic disorder, STDs (Sexually Transmitted Diseases), and endocrinological or immunological problems. Malaria, gonorrhoea, Chlamydia (Sexually transmitted infection) and other diseases may also cause infertility. Physiological causes that may cause infertility are tubal blockage, congenital malformation, abnormal ovulation, low quality and quantity of sperm and ejaculatory dysfunctions. World Health Organization estimates that the secondary infertility increases from 5% for the age 20 – 24 years to  62% by the age 45- 49.

Intracytoplasmic sperm injection (ICSI) is a procedure in which the sperm is directly injected into eggs that are obtained from in vitro fertilization (IVF). ICSI is advised when there is difficulty in achieving fertilization. ICSI is most commonly used procedures for people suffering from male infertility factors. These factors include: slow movement of the sperm or poor mortality, poor sperm quality, low sperm counts, sperm that lacks the ability to penetrate the egg or azoospermia. ICSI has been applied majorly to cure problems of severe male infertility in human patients who can neither be assisted by conventional IVF procedures nor be accepted for IVF.

High cost involved in in-vitro fertilization and country wise regulatory issues are the major factors hindering the in-vitro fertilization market. The high cost of IVF procedures is one of the significant factors restraining the market growth due to which the IVF treatment is still beyond the reach of a large number of infertile women. According to the American Pregnancy Association, IVF treatment cost in case of a woman aged below 35 is less, and it increases as the age of woman increases. The maximum age that is entertained by the majority of clinics around the globe is 44 years. The cost of IVF treatment is the highest in the US, and when coupled with egg donation it becomes very expensive even for the local residents. Due to variation in the costs of treatment and low cost of living, an increasing number of couples are availing the treatment from Panama, Mexico, India, and Thailand at an affordable cost. Total expenses also include diagnosis cost and the cost of the medicines, which together makes the IVF treatments very costly.

Products are segmented into:

Procedures are segmented into:

End –users are segmented into:

The report scope is widely categorized on the basis of its components which includes products and procedures. Moreover, the market revenue estimates and forecasts include only in-vitro fertilization techniques and exclude the conventional infertility treatments.

Geographically, the global In-vitro fertilization market has been segmented on the basis of four major regions, which include:

Europe dominated the global in-vitro fertilization market by capturing the largest market share during the forecast period. Europe IVF market is primarily driven by low fertility rate, government support for the adoption of in vitro fertilization, increasing healthcare expenditure and the high success rate of IVF methods. According to UN’s world fertility pattern 2015 report, the average fertility rate in Europe was 1.6 children per women in 2015 which is very much low as compared to the global average of 2.5 children per women in 2015. Such low fertility rate in Europe is the primary driver for the high adoption of in-vitro fertilization. Further, proactive government support for the adoption of IVF is also proving to be a major driver for the growth of the IVF market in Europe. On the other hand, the IVF technology is also gaining pace in the Asia Pacific region, as the infertility rates are spiralling there. Additionally, the rapidly rising geriatric population is a major concern for countries with below average birth rates such as Indonesia, Vietnam, Cambodia and the Philippines. Also, the rising trends towards delaying pregnancy has steadily increased in China and many other Asian countries, resulting in ageing of the eggs, making it less suitable for fertilization. This, in turn, has increased the need for IVF services in the APAC region.

The In-vitro fertilization market is segmented based on products (which are sub-divided into reagents and equipments), and also on the basis of procedures (which are sub-divided into intra-cytoplasmic sperm injection , pre-implantation genetic diagnosis, frozen embryo transfer/replacement and others).  End-users for this market include fertility and surgical centers, hospitals and research laboratories, and cryobanks.

The major market players in the global in-vitro fertilization market are:

These companies are using organic and inorganic strategies for growth. For instance, in June 2016, Vetrolife acquired Octax, which develops and produces OCTAX Laser and Imaging Systems. The acquisition will strengthen the position of the former in the medical sector as well as broaden the product portfolio within the growth segments of IVF. In November 2016, Cooper Surgical acquired Smiths Medical – Wallace, a manufacturer of products such as micropipettes, needles, and catheters for assisted reproduction and IVF.

FIGURE 19 NUMBER OF IVF CYCLES PERFORMED IN THE US

FIGURE 21 FERTILITY RATE IN CANADA (NO. OF CHILD PER WOMEN)