A blockchain technology is a growing list of records, called blocks, which are linked using cryptography. Each block contains a cryptographic hash of the previous block, a timestamp and transaction data (generally represented as a Merkle tree root hash). Blockchain technology is one such instrument that has the potential to underpin the upcoming technological transformation and place the automotive stakeholders at a position from where they can adapt to this paradigm shift.

A blockchain technology is a growing list of records, called blocks, which are linked using cryptography. Each block contains a cryptographic hash of the previous block, a timestamp and transaction data (generally represented as a Merkle tree root hash). Blockchain technology is one such instrument that has the potential to underpin the upcoming technological transformation and place the automotive stakeholders at a position from where they can adapt to this paradigm shift.

The global automotive blockchain market was valued at $199.76 million in 2018 & is estimated to generate net revenue of approximately $5907.75 million by 2027, growing at a CAGR of 45.01%. The base year considered for the study is 2018 and the estimated period is between 2019 and 2027. The key factors that are responsible for the market advancement are: 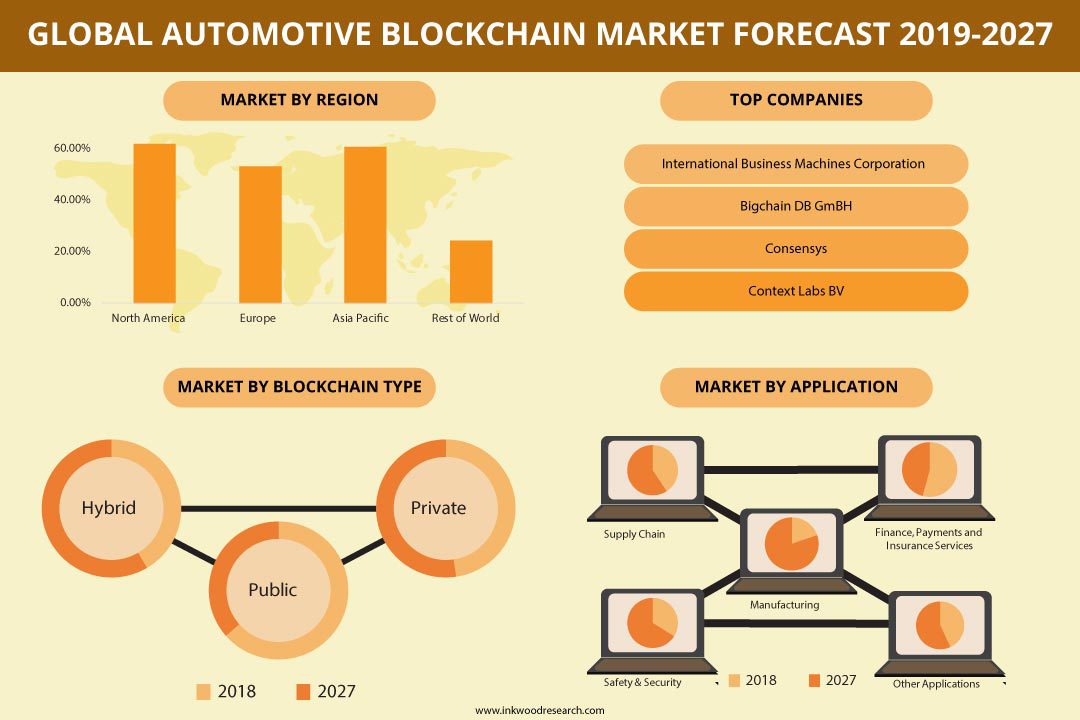 In terms of application segment, manufacturing segment is the fastest growing market in terms of revenue with around XX% market share in 2018. The blockchain possesses a lot of opportunities for the automotive manufacturing process and has the potential to drive the next wave of innovation for manufacturing value chain. Smart contracts can improve the overall process by reducing costs and enhance the cooperation and trust across the value chain. Major issues such as the management of the production and product recalls can be catered to with the help of this technology. Blockchain enables transparency between manufacturers and suppliers which improves the overall process. Value chains in automotive manufacturing are very complex, and the trade of even a single component may involve multiple organizations across various geographies.

Type is sub-segmented into:

The application is sub-segmented into:

This report covers the present market conditions and the growth prospects of the global automotive blockchain market for the forecast period of 2019-2027. The report considered the revenue generated through the sales of automotive blockchain technology by types, as to calculate the market size by considering 2018 as the base year.

Geographically, the global automotive blockchain market has been segmented on the basis of four major regions, which includes:

The regional structure of Automotive Blockchain Market is dominated by North America region by capturing largest market share in terms of revenue of XX% in the year 2018. In North America, the automotive industry is regarded as one of the more cutting-edge sectors that often leads the way for new technologies such as artificial intelligence and autonomous systems. Car manufacturers have been quietly picking up on the blockchain phenomenon, trying to figure out different ways in which they can utilize the immutable ledger to their different needs. BMW, Ford, Renault and General Motors are among the 30 companies in MOBI. MOBI was formed on 2nd May 2018 when four leading automobile manufacturers launched a joint venture with the help of those additional thirty companies. The group’s mission is to speed up the adoption of blockchain and change transportation, as well as make sure the industry is on the same page with use cases ranging from autonomous payments to ride-sharing, according to MOBI’s website.

The market has a number of players, and some of the key players involved in global automotive blockchain market are:

Company profiles of the prominent market players are discussed in detail. In November 2018, IBM and VMware, Inc. announced new offerings to help accelerate enterprise hybrid cloud adoption. This includes new IBM services offering to help migrate and extend mission-critical VMware workloads to the IBM Cloud, and new integrations to help enterprises to modernize applications with Kubernetes and containers. In September 2018, BigchainDB collaborated with Ares Tech to build a prototype for a blockchain based gaming platform. The BigchainDB based game asset management service will be one building block of Ares Tech’s scalable blockchain social gaming network. The gaming industry is full of digital assets: rewards, characters, unique items, and currencies to name a few. It’s an industry dominated by few centralized and non-transparent platforms which makes it a very interesting area for the application of blockchain. For example, recently, the BigchainDB 2.0.0b7 (Beta 7) has been released. It includes chain-migration elections and a new bug fix. BigchainDB 2.0 (not Beta) will be released once Tendermint 1.0 is released. Tendermint is expected to make breaking changes, so BigchainDB will have to be updated accordingly.

FIGURE 9. GLOBAL AUTOMOTIVE BLOCKCHAIN MARKET, BY OTHER APPLICATIONS, 2019-2027 (IN $ BILLION)