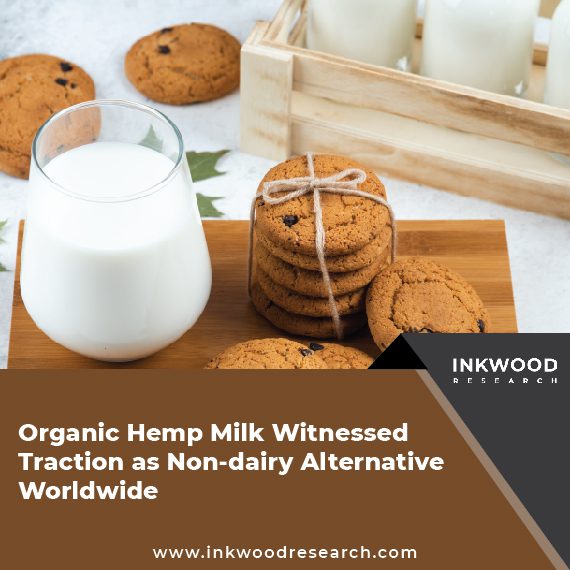 Consumers today are increasingly turning towards organic dairy foods and beverages. This trend is a result of the rising health-consciousness among populations. Consumption of organic foods has several benefits; it is much healthier than non-organic foods and is pesticide- and GMO-free. Moreover, organic produce is environment-friendly and cruelty-free.

Hemp (or industrial hemp) is extracted from the ‘Cannabis sativa’ plant species. Seeds derived from the hemp plant have high nutritional value and are a great source of plant-based protein. The milk is plant-based, obtained by soaking and grinding hemp seeds in water. The texture, color and flavor of hemp milk are similar to cow milk, which increases its appeal among the masses. 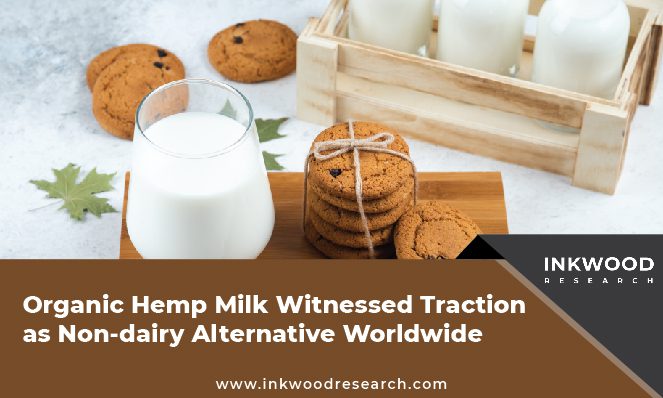 Organic hemp milk has received a thumbs-up from nutritionists and medical professionals alike. It is even popular among celebrities and athletes. Hemp milk has a nutty taste and is available in two forms – sweetened and unsweetened. Sweetened milk is consumed on a broader scale than its unsweetened counterpart, which could be attributed to the enhanced taste and innovative flavors offered by the sweetened milk. However, the consumption of unsweetened milk is also on the rise, with several companies introducing varieties, in a bid to attract the health-conscious population.

Organic hemp milk receives certification after undergoing stringent checks by regulatory authorities. It is available in hypermarkets/supermarkets as well as on online retail sites. Also, it is a quick and easy recipe that can be made at home and used as a substitute for regular milk to make tea, coffee, smoothies, shakes as well as cooking and baking.

Hemp milk is loaded with nutrients such as vitamin A, vitamin D, vitamin E, vitamin B-12, folic acid, omega-3 fatty acids, omega-6 fatty acids, calcium, magnesium, riboflavin, potassium, phosphorus and zinc, among others. It is thus considered to be a superfood by many.

This milk is rich in antioxidants, which help flush out toxins and free radicals from the body; free radicals could lead to several illnesses. Research has shown that people who consume it on a regular basis have a stronger immune system.

The consumption of this beverage results in better skin, hair and nails. It contains vitamin A and vitamin D; which help in reducing the stress on the body’s external organs that causes aging. Vitamin A helps produce collagen, which aids in diminishing wrinkles, creases and spots on the skin; whereas, Vitamin D aids in strengthening hair and nails.

The high potassium content of the milk boosts one’s cardiac health. The probability of developing arrhythmia or heart disease is significantly lowered by the consumption of organic hemp milk, owing to the presence of omega-3 fatty acids.

The calcium found in organic hemp milk helps in strengthening the bones, enhancing their density as one grows older. In tandem with iron, zinc and magnesium, calcium leads to a decrease in the occurrence of several bone disorders, including osteoporosis, and aids bone development.

6. Does Not Contain THC:

Hemp seeds and marijuana are derived from the same source, i.e., cannabis. However, unlike marijuana, hemp seeds do not contain tetrahydrocannabinol (THC). THC is a psychotropic chemical which is a natural constituent of cannabis (marijuana).

Organic hemp milk is rich in omega-3 and omega-6 fatty acids, which help improve brain function. It is beneficial for boosting one’s memory and concentration. Thus, the consumption of hemp milk is highly recommended for people having neurodegenerative disorders.

Cow milk is the most popular and widely consumed. Though it has several benefits, due to its high lactose content, it is not suitable for people with lactose intolerance. Moreover, with the rising trend of veganism, organic hemp milk is an excellent option for vegans, as it is devoid of animal products.

Vegans form a loyal consumer base for the drink. Companies in the food & beverage industry have started to cash in on these trends by launching their own brands. Wild Harvest, Pacific Foods of Oregon, Inc., Living Harvest Foods, Inc., MaMilk, Fresh Hemp Foods Ltd., Good Hemp and Good Mylk Co. are some prominent companies in the market. Among all, ‘Tempt’ by Living Harvest Foods is one of the most widely bought hemp milk brands.

Trends also show that hemp milk consumption to be the highest in North America, with the region capturing almost half of the global market. Besides, industrial hemp is largely consumed in Europe, owing to which there is a high demand for hemp milk. The consumption of hemp milk is growing the fastest in Asia-Pacific countries. With the rising popularity of the beverage in Australia, manufacturers are developing pasteurization techniques to prolong the shelf life of hemp milk.

The rising consumption of organic hemp milk busts all the myths associated with the drink. Though the beverage caters to a niche consumer base at present, its popularity is set to grow in the future.