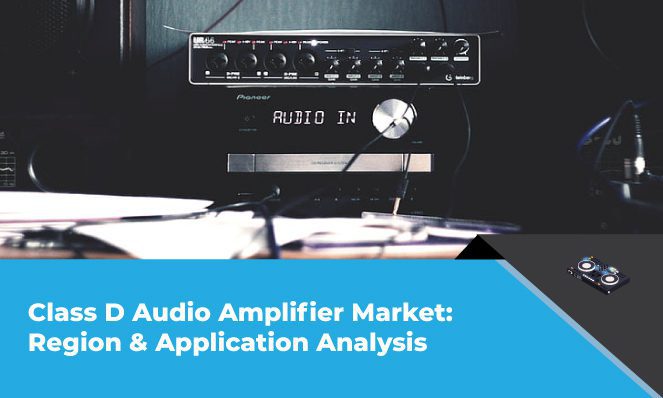 First proposed in 1958, class D audio amplifiers have become increasingly popular over recent years. A traditional class D audio amplifier is characterized as a switching amplifier, typically comprising two power MOSFETs, in addition to a pulse-width-modulation (PWM) signal. They are often misinterpreted as digital amplifiers or typically ‘two levels better’ compared to conventional class A amplifiers. However, in reality, the technology is widely adopted for traditionally heavy and inefficient power amplifiers across large-scale public addresses, live sound systems, as well as voice reinforcement.

According to the estimations put forth by Inkwood Research, the global class D audio amplifier market is anticipated to grow with a CAGR of 9.63% over the forecast period of 2022 to 2030. The global market’s growth is fuelled by key drivers such as the rise in vehicle production and the surging usage of audio devices. Moreover, the advantages of these audio amplifiers over the functionality of class A, B, and AB amplifiers play an integral role in their increased demand and adoption across various applications.

Analog class AB amplifiers have been used in the audio industry for decades, with the ability to deliver excellent sound quality sustaining their market position. However, their inherent bulk cannot be accommodated in automotive and battery-powered products. Consequently, AB amplifiers are being replaced by class D audio amplifiers on a large scale, especially in e-vehicles. The amplifiers used for acoustic vehicle alerting systems (AVAS) also emit warning sounds for alerting pedestrians of the presence of e-vehicles.

Moreover, the optimization of the performance of the amplifier needs acute attention to the choice of the inductor used in the low-pass filter at the output. Cueing into the effectiveness of this class of amplifiers in automotive audio applications, STMicroelectronics publicized the HFDA801A, a 2 MHz pulse width modulation (PWM) amplifier with a quad-bridge configuration. Even with the reduced heat dissipation output by these designs, overheating can still occur during longer operational periods. Therefore, temperature monitoring is imperative to avoid overheating—a feature built into the company’s HFD801A.

According to Inkwood Research, Asia-Pacific is set to be the fastest-growing market for class D audio amplifiers. While the rising population is followed by extensive demand for consumer electronics and automobiles, leading electronic manufacturers are based in the region, as well.

This factor is integral for the expansion of the Asia-Pacific class D audio amplifier market since the cost of shipments and final products are relatively lesser in the region.

Class D audio amplifiers function in a unique manner. While onboard circuitry generates very high-frequency (often more than 100K Hz) pulses of DC, the width of every pulse is then modified by the input signal. Besides, the wider the pulse is, the louder the signal would be. These DC pulses run through the amplifying output transistors, thus resulting in high-power output.

Furthermore, since the audio amplifiers receive DC pulse and not analog signals, the transistors, also termed MOSFETs, are either completely on, with power, or completely off, with no power. As a result, this is the most effective way of operating these transistors, subsequently expanding their adoption across various applications and strengthening the global market’s growth.

What key issues must be addressed to achieve overall good sound quality in class D amplifiers?

Distortion mechanisms, distortion mechanisms, clicks and pops, and signal-to-noise ratio (SNR) are some of the key issues that must be addressed to achieve overall good sound quality. For instance, in order to avoid the perceptible hiss from the amplifier noise floor, the SNR should exceed 100 dB for medium-power designs and 90 dB for low-power amplifiers, particularly for portable applications.

Class D audio amplifiers are used in the majority of consumer electronic devices ranging from theatrical and concert reinforcement systems to headphone drivers, televisions, microwave ovens, and mobile phones, among others. Therefore, the increasing applications and adoption of consumer electronics have substantially surged the demand for class D audio amplifiers, thus fueling the global market’s growth.